ABU DHABI, UAE, Oct. 13, 2019 /PRNewswire/ -- The UAE and UNESCO renewed their collaboration to the flagship initiative Revive the Spirit of Mosul, extending the partnership on restoration efforts in Mosul, Iraq.

ABU DHABI, UAE, Oct. 13, 2019 /PRNewswire/ -- The UAE and UNESCO renewed their collaboration to the flagship initiative Revive the Spirit of Mosul, extending the partnership on restoration efforts in Mosul, Iraq. 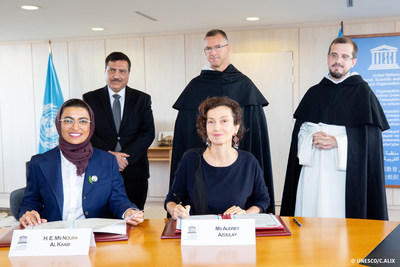 In the presence of HE Abdulrahman Hamid al-Husseini, Iraq's Ambassador to France; HE Dr. Mohamed Ali Al Hakim, Under Secretary General and Executive Secretary of the United Nations Economic and Social Commission for Western Asia (ESCWA); Brother Nicolas Tixier, Prior Provincial of the Province of France of the Dominican Order; and Brother Olivier Poquillon, General Secretary of the Commission of the Bishops' Conferences of the EU; HE Noura Al Kaabi, UAE Minister of Culture and Knowledge Development; and Audrey Azoulay, Director General of UNESCO signed a new agreement at the UNESCO headquarters in Paris, reiterating the restoration efforts with the inclusion of two destroyed cultural sites; the Al-Tahera and the Al-Saa'a Churches.

This agreement arises in line with the UAE championing 2019 as the Year of Tolerance, emphasising tolerance as a universal concept and a sustainable institutional endeavour.

The project is an extension of the agreement signed in April 2018 whereby the Emirates committed $50.4 million to the rebuilding of the cultural sites in Mosul. The project initially concerned the reconstruction of Al-Nouri Mosque and Al-Hadba Minaret.

The renewed efforts will include the construction of a museum and memorial site which will exhibit and preserve remnants of the sites with community and educational spaces, as well creating jobs for over 1,000 Moslawis. The new buildings will support the development of sustainable skills for those employed by the project, and the contribution to the local economy through cultural tourism for Iraq. To date, the project has employed 27 Iraqis and contracted 4 Iraqi companies, with efforts to further bolster this growth as the project progresses. The UAE has also engaged with local Iraqis to receive feedback about their perspective on the restoration project.

Speaking at the signing, HE Noura Al Kaabi remarked: "We are honoured to sign this partnership with UNESCO and Iraq. Our work with UNESCO is testament to UAE's commitment to furthering the organisation's mandate. Today's signing is a pioneering partnership that sends a message of light, in seemingly darker times. As we break ground in the reconstruction, UAE becomes the first country in the world to rebuild Christian churches in Iraq."